The X Series 1 has to be the most iconic of the XJ series cars. Voted the best car in the world on its debut and set a whole new era in motion for the Jaguar marque.

As recorded on another page on this sight HERE I did previously own a Series 1 MOD car and in many ways regretted selling it. Although it was a MOD car it was not a factory manual, having been converted by an earlier owner.

Whilst involved in my usual practice of trolling Facebook and Marketplace I noticed a local car, a Jaguar XJ Series 1 was advertised for sale just a short distance from home. (Photo opposite) A 1971, 4.2ltr. factory manual electric overdrive car.

The add described the car as being laid up for some years and needed someone to love it. The price was too good to be true and I determined to check this car out. I was told by the seller that he had had over 300 messages in response to the advert but because I identified myself as a member of the local Jaguar Club I would have first option as he did want the car to be saved.

The car was not running but was a locally delivered car in Adelaide and the interior had been completely refurbished a few years previously with new leather seats, hood lining, door cards etc.  Needless to say this stray cat just followed me home. 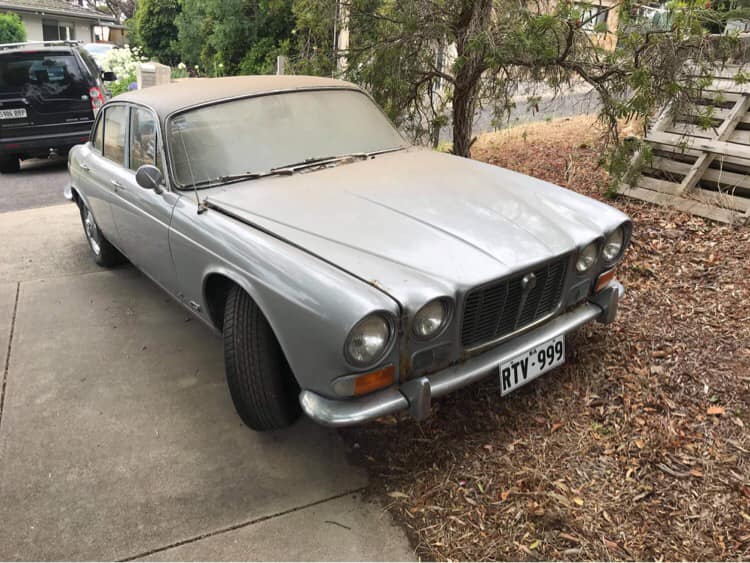 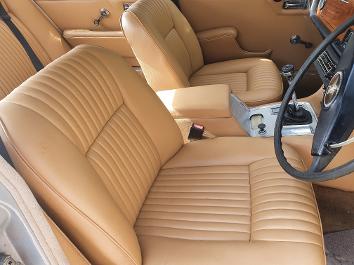 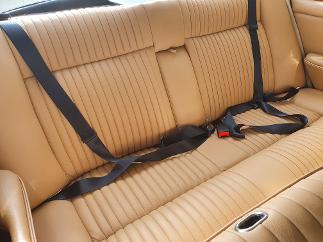 As the photos opposite demonstrate, the interior had been totally refurbished, with new leather seats, new door cards, hood lining etc. This was a total bonus.

However the car did have other issues. The car had been stored in a carport with the drivers side exposed to the weather hence the tin worm had caused havoc with the drivers door, the front of the bonnet, the RHS front guard and the rear passenger side door. the gutter behind the RHS chrome strip was also showing signs of deterioration. The rear bumper had seen better days and the registration light assembly in the rear bumper was completely shot from rust. There was a rust hole in the boot and some signs of rust in the rear beaver panel. So, I did have some work to do as the photos below show. 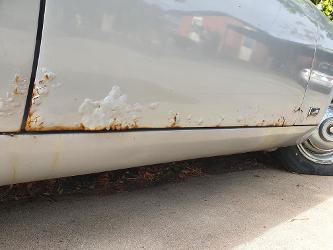 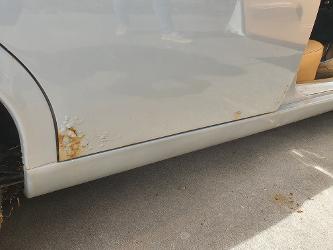 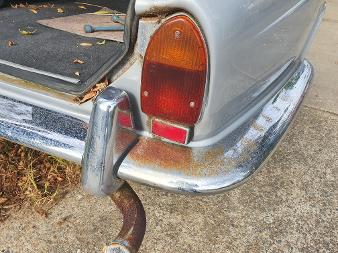 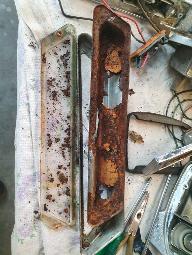 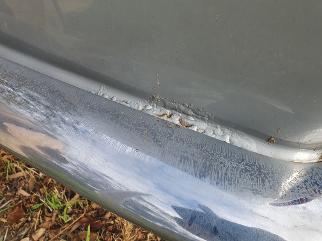 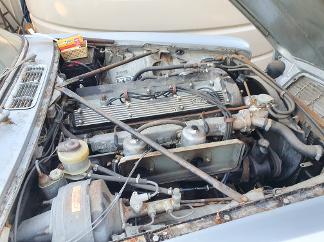 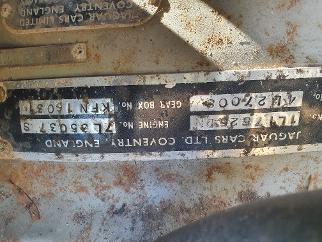 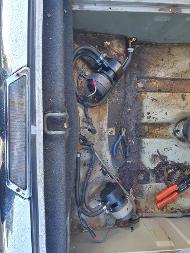 As mentioned above, being a matching numbers factory MOD car it had to be saved being a relatively rare car in Australia. But will I just preserve it?  Fully Restore it? Or what are my options?

I decided to set myself a strict budget of $15,000 all up including the initial purchase price and see if I can end up with a respectable car that I could be proud of and be happy to enjoy for at least some time. The option to sell it once a tidy up is complete remains an option.

The engine bay was a mess, full of leaves and crud that had accumulated during a lay up period. So first task was to get rid of this rubbish and then see if the engine would run at all before I spent lots of money on the body repairs. After draining and flushing the tanks, flushing the fuel lines, and replacing a couple of fuel lines, I changed the plugs, checked the oil and coolant (coolant was a sparkling green, a good sign), and put a good battery in place. Bingo! she fired up straight away and ran smooth and quiet with good oil pressure. 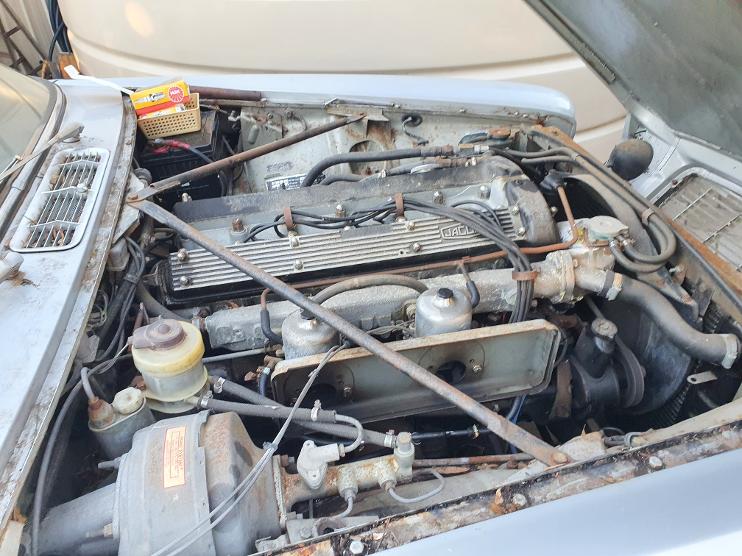 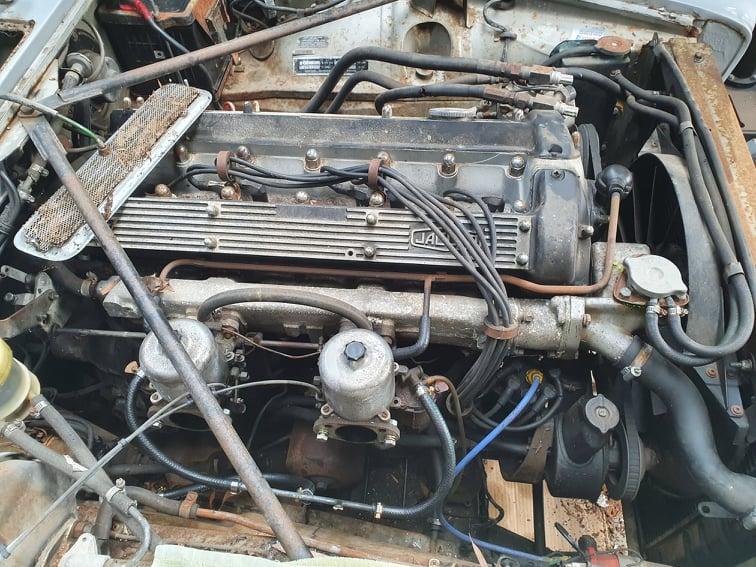 So Bonnet off, radiator out, carbies off, brake booster and brake lines removed, battery out (what a rusty mess under the battery). I was then ready to rub the inner guards back, clean and paint with a rattle can, just to get it respectable. As the photos show . . . .not a bad outcome really.

Now that is better . . . . . . . . . . looking loved and appreciated! Lets get some more bits back in the engine bay. Brake booster re-built, carbie cleaned and bells polished, Air cleaner fresh  paint, Cam covers painted insitu an example of what I mean by "just a tidy up".

It was now time to consider what I would do about the painting of the whole car. I had to do something, with some light rust spots and panel repairs needed. But just how far do I go?. Initially I was planning to just have a closed door respray in the same colour. It helps when your son is a professional spray painter and he agreed to do the job, but was not happy with some of the limitations I was planning. He insisted we also do the sills and inside door panels etc. So essentially a full respray omitting the boot and of course the engine bay which I had already, (in his words) made a mess of.

We determined the bonnet, the RHS front guard/wing and the drivers door were not economically repairable. Fortunately a mate had an early Series 1 shell with a good drivers door and RHS front guard, a good start. After much hustling I was able to source a good bonnet (from a Series 1 Daimler car). So the fun begins.

Off with the RHS front guard, drivers door, under tank panels, radiator top support and lower front beaver panel . . . . . . . in preparation for a grit blast of all these panels . The bonnet would be hand stripped to avoid any warping from the grit blaster. All panels were returned with 2 Pak primer finish. Great job.

So the next step had to be preparing the rest of the body for primer.  The rear drivers side door needed some rust repairs, as did one of the under tank panels. Other small rust issues were also tended to along with the rust in the floor of the spare wheel compartment in the boot. It was then time to tackle the priming of the body as a whole. This is when we get a glimpse of what it will look like finished.

The panels that came back from the grit blaster needed to be primed, front guard, RHS front door, beaver panels and under tank panels. We thendetermined to finish the 2 Pak colour of inner door frames, sills and door pillars in our home shed. For the final exterior paint it will go to a mates booth. (Good to have mates like this)

Plenty of wet rubbing went into preparing the body for the paint booth. But finally it arrived at the paint booth. A colour had been chosen closely resembling the original Metallic Silver Grey.  because the car had already been painted (rather roughly) by the previous owner, there was no guarantee how close the current colour was to the original. Once in the paint booth the final preparation could be completed before the top coat and then clear coat. 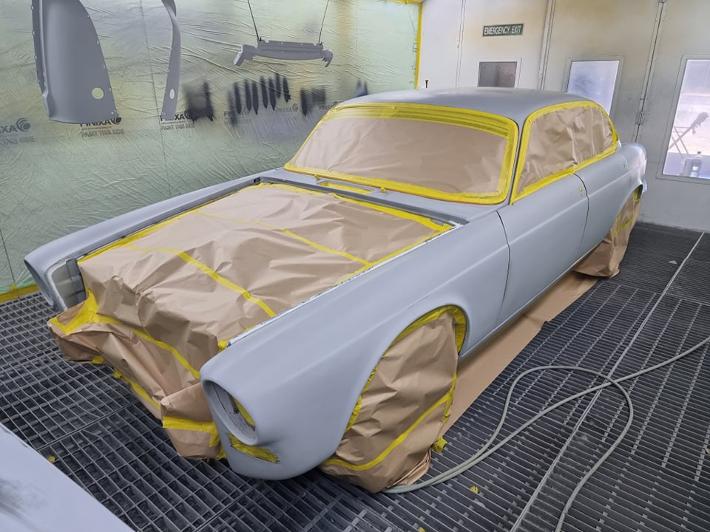 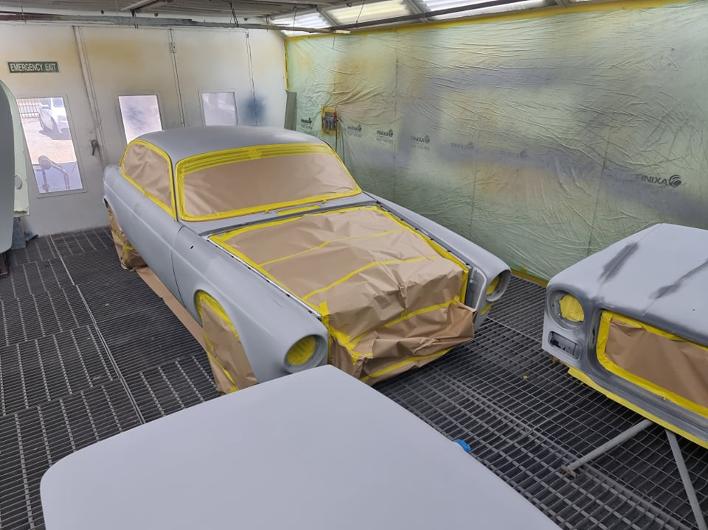 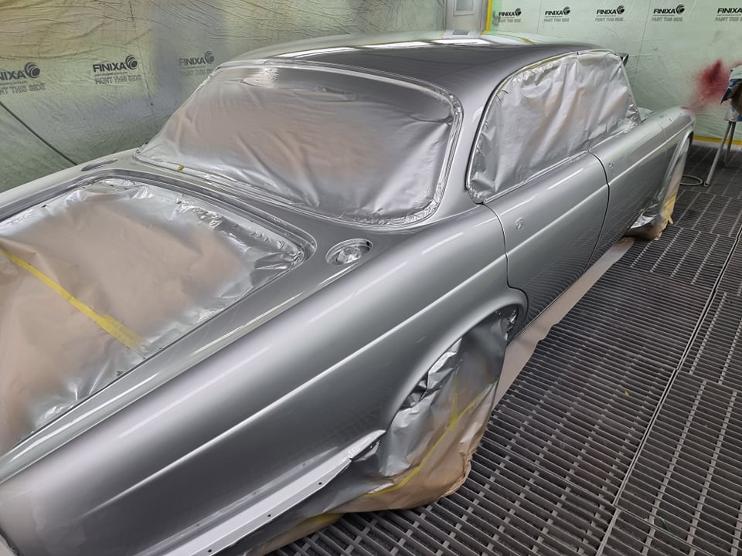 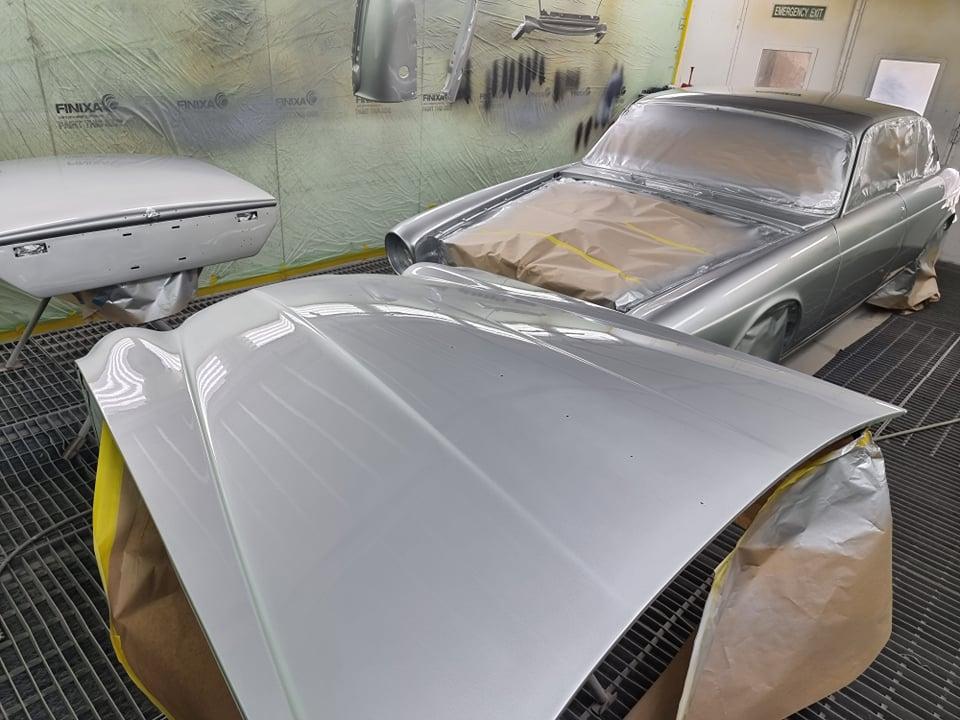 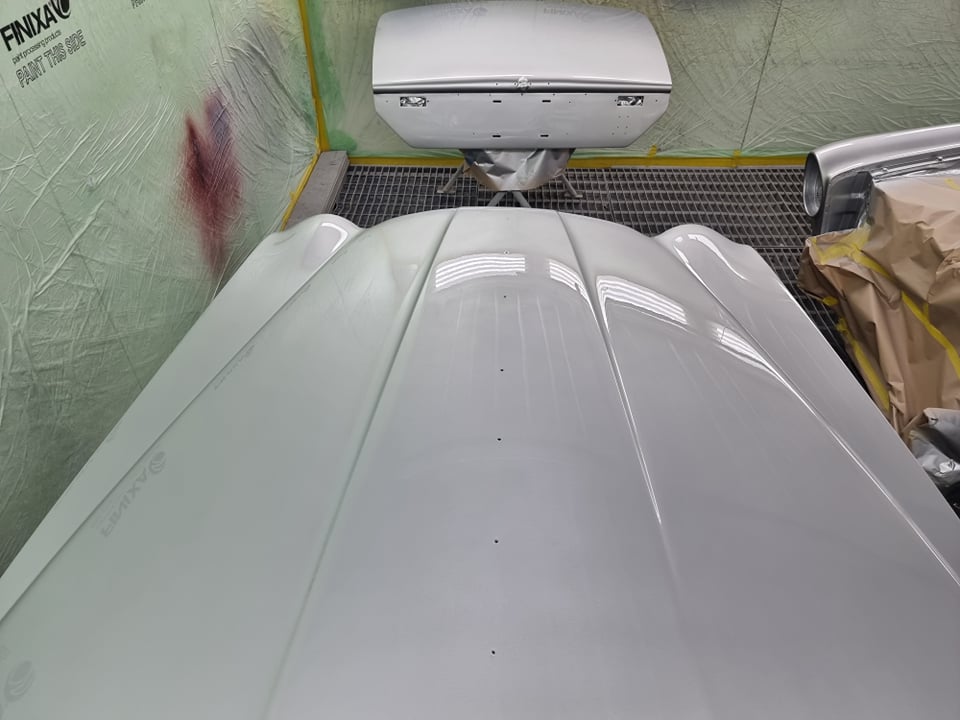 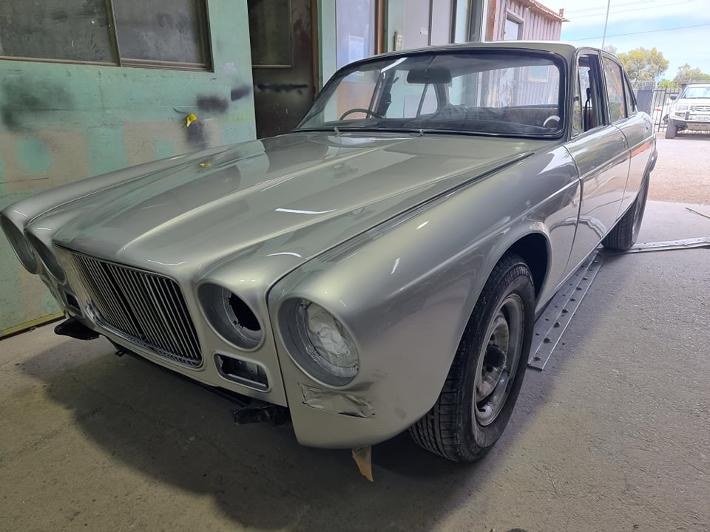 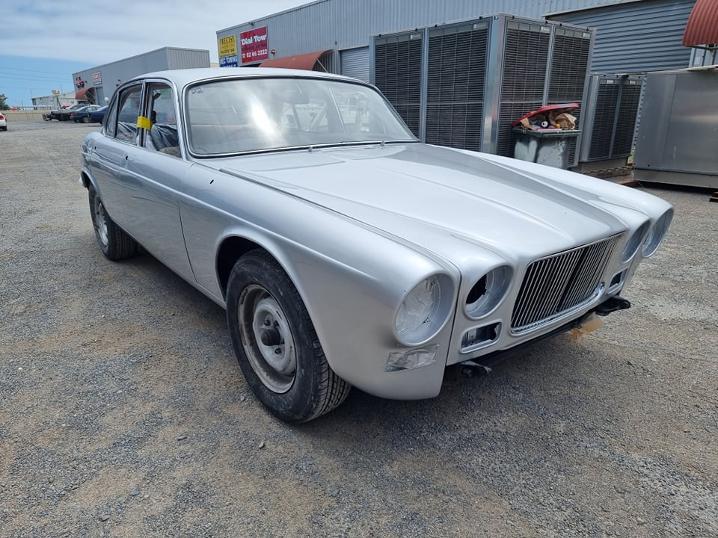 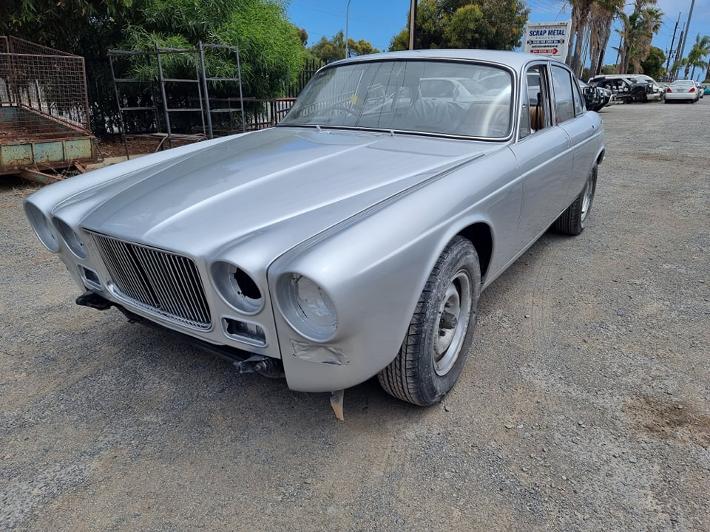 Now back home in my shed . . . . . and things can start to get really exciting as all the shiny bits go back on..  The V12 grill has been chosen simply because I prefer it over the original rather bland XJ6 grill. The car still needs a final rub down and polish, but it is looking rather magnificent in my opinion.