This is my Jaguar Story

I Just Wanted One!

I grew up in Griffith NSW where my family owned a rice farm.  My uncle Ben, now deceased who also owned a rice farm nearby, purchased a brand new Jaguar Mk 1 2.4ltr (if my memory serves me right) in the late 50s. It was a black car with red leather interior. I was just a teenager at the time but remember the car well, it was the envy of my father who owned the current model Ford (1959 Star Model) V8 (with plastic covered vinyl seats) and there were many rather daring races, much to my mothers dismay, on country roads of a Sunday as we traveled home from church.

I guess my desire, to own one of these Jaguars had its beginnings back then and I never quite got over it. I recall that this car was regarded as a very prestigious car to own in those days and the envy of many. The car stayed in the family for many years and in latter years I often enquired after it with the thought that maybe one day I might own it or one just like it. But I had to wait another 45 years or so, before my dream would be realized. I wonder how many ‘baby boomers’ finally buy in their retirement the car they always wanted but could never afford?  Even a mid-life crisis in my early forties only resulted in a fully restored MGA Roadster (A five year restoration project and a lovely car) but satisfying as it was, it was not a Jaguar.

I wonder how many ‘baby boomers’ finally buy in their retirement  the car they always wanted but could never afford?

I originally had my heart set on purchasing a Jaguar Mark 11, and scanned the internet for approximately six months trying to hide my determination rather unsuccessfully from my wife. During this period it was inevitably that I learnt a great deal about values etc. I spoke to many sellers and personally inspected a few local cars, but was disappointed with what I found. I was determined not to pay too much and found sellers expectations on price usually exceeded my willingness to pay. The complete ground up restoration on my 1959 MGA 1600 roadster (Click here) taught me what some of the pitfalls of restoring a classic car were, particularly the cost blowouts. With this experience in mind I had a preference for a fully restored or at least almost fully restored vehicle where most of the work had been done. This time I would let someone else spend the money.

My search for a Mark 11 was not proving very successful when my brother-in-law in Sydney who knew what I was looking for, sent me a photo of a 1966 S-Type up for auction in Sydney. I was aware of this model but had initially decided against it, probably for no real reason other than the sheer popularity of the Mark 11. However with a little more research, I decided it really did suit my style, age, and my considerable physical size. I was impressed by the write-ups and testimonials from those who owned S Types and information sourced from the forum at “Jag Lovers” (what a great web site)  and found other owners of S Types urging me to “just do it!”  The sophistication of the car with the IRS, internal finish etc. (The Businessman’s Express indeed) finally won me over and I decided this was to be my Jaguar.

The car with Queensland registration 66-CAT, was being offered for Auction by The Classic Throttle Shop, a well established classic car dealership in Sydney, that was conducting their inaugural classic car auction. After having my brother-in-law (who has owned numerous classic cars himself and needed little encouragement) inspect the car and report that it seemed to be everything the promotion and photos claimed, I decided a trip to Sydney was inevitable. On arrival in Sydney I inspected the car with my other brother-in-law  (who had just arrived from London) who also owns and appreciates classic cars. The car did indeed seem to measure up to the advertising and so I decided I would be bidding that evening.  As it turned out I was the only bidder on the night and after some further negotiations I was successful in the purchase of the car the next day (6th Dec 2009) I was of course like a kid with a new bike. 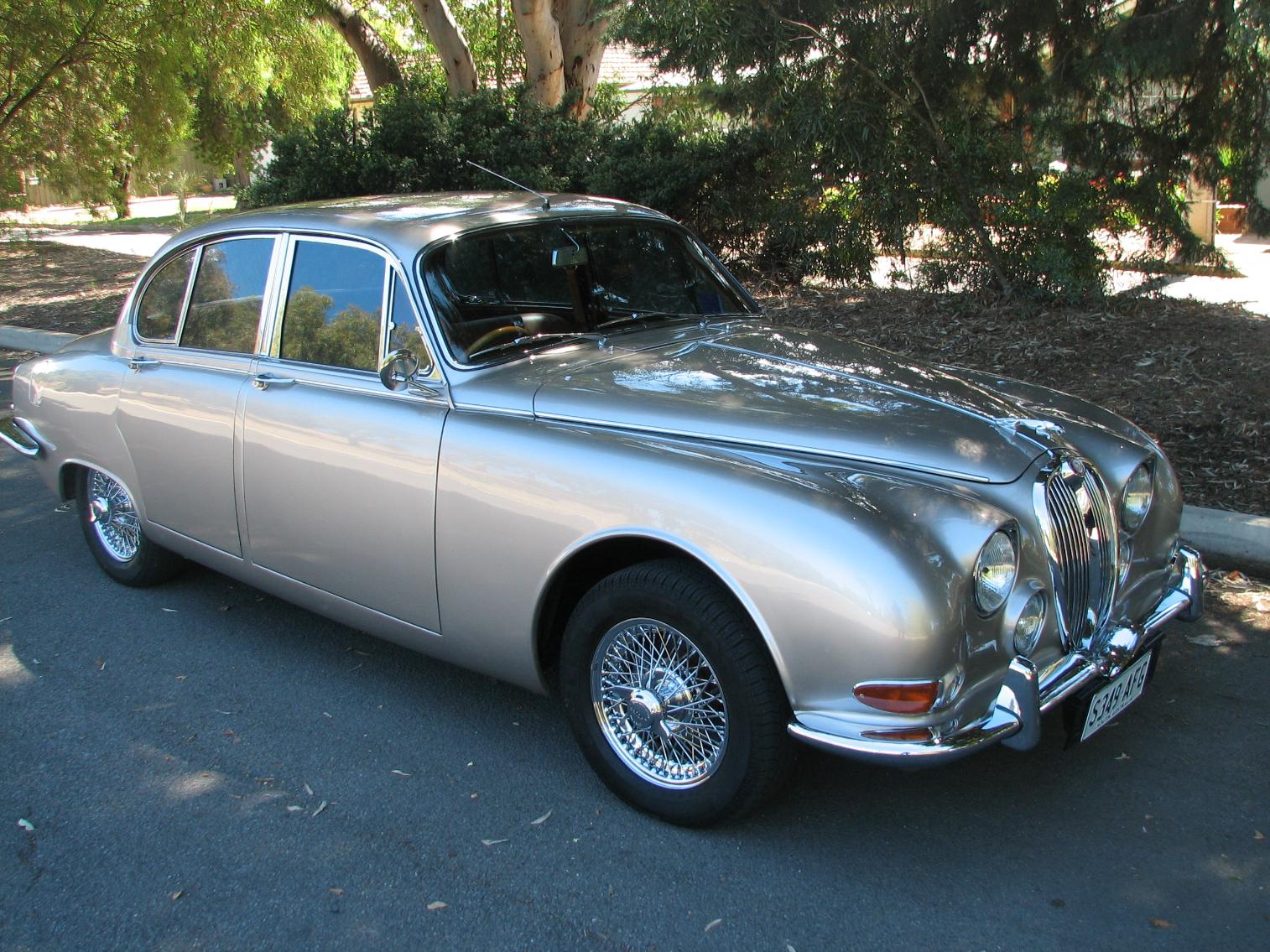 The car came with factory power steering and heated rear window and with some historic records and a rather comprehensive list of receipts. I have no history of the car prior to 1993. Jim Leicht, of Toowoomba Qld. owned the car from at least 24th March 1993 to 12th May 2007. He sold the car to Sandy Brinkman of Noosa, Qld., who owned the car from 12th May 2007 to 6th Dec 2009. Sandy clearly did not use the car a great deal but was successful in gaining a prize with it at the Noosa Car Show.

Jim Leicht, had in the mid nineties carried out an extensive restoration of the vehicle with approximately $60,000 worth of receipts being supplied with the purchase. (Don’t you just love that…. ) This restoration included a bare metal re-spray. The car I have been told by Jim was originally Golden Sand, it had been painted white before his purchase and he changed the colour to light oyster gold (metallic) The restoration included a complete internal make-over with carpets, leather seats and all interior linings and trim replaced, new woodwork, new wiring harness, some new chrome, new wire wheels (5) with Pirelli tyres. There is also evidence in the receipts that the motor had an overhaul at the same time, however it seems to me now that this overhaul was not as thorough as it could have been and I have now decided to remove the motor and have it completely rebuilt to my satisfaction and peace of mind.

I have been able to obtain a Heritage Certificate for the car which verifies that the car was indeed sold with the original colour being Opalescent Golden Sand, and confirming that the Chassis Number, Car Number and Engine Numbers etc. are indeed the original matching numbers.

At this point there is a little twist to the story. The car was sold to me as having left the factory as a 3.4ltr. (Confirmed by the Heritage Certificate) that had been converted to 3.8ltr. I didn’t think much more about it at the time, I was delighted to have successfully purchased the car and was happy to have a 3.8ltr. However curiosity got the better of me. The receipts from the partial rebuild in 1995 itemised amongst other things the fitting of 3.8 rings. Yet the block is clearly embossed 3 ½ Litre, and the engine numbers confirm this. Could it be that the motor was bored to 3.8 ltr. specifications by a previous owner? You can imagine my curiosity that turned to confusion when my learned friends on the “Jag Lovers Forum” assured me this could not possibly be the case. “It just cannot be done!” some said. (Sometimes we can have just enough knowledge to be dangerous.)  Others suggested that this was a common practice used for racing purposes. A 3.4ltr. block bored to 3.8ltr. without sleeves.

So without ‘boring’ you too much, with the head now off, I can reveal that the 3.4ltr. block has indeed been bored to 3.8ltr. without sleeves. (which is well beyond the recommended limits for a 3.4 block.)   So….decisions, decisions, decisions…..what do I do?  At this stage I am inclined to sleeve the block back to 3.4ltr. but that decision is yet to be finalized.

With the body work and interior of a suitable high quality it is not my intention to change much other than a few cosmetic touch-ups and a few chrome up-grades. My concentration is now on rebuilding the motor and enjoying the ride.

Of course one Jaguar was never going to be enough! For six months I surfed the net and dreamt about another Jaguar that would be a daily driver. I have always been a GMH man owning many Holdens of various shapes and sizes. More recently I had owned two Holden Calais VE  V  6ltr V8. (see pictures)  These were great cars with all the power of a V8 6ltr Chevy. I grew very interested in the change by Jaguar to the all alloy body construction in the XJ8 X350 from 2003 onwards. Seemed to me that these cars with the alloy body and the last of the classic Jaguar styling could be a collectable whist offering me a great ride in the meantime. So with a clear head, and sound reasoning I purchased a 2004 X350 and what a magnificent car it is. The sacrifice in power is more than compensated by the sheer luxury of this sophisicated motor car. So right now, I am just enjoying the ride......... 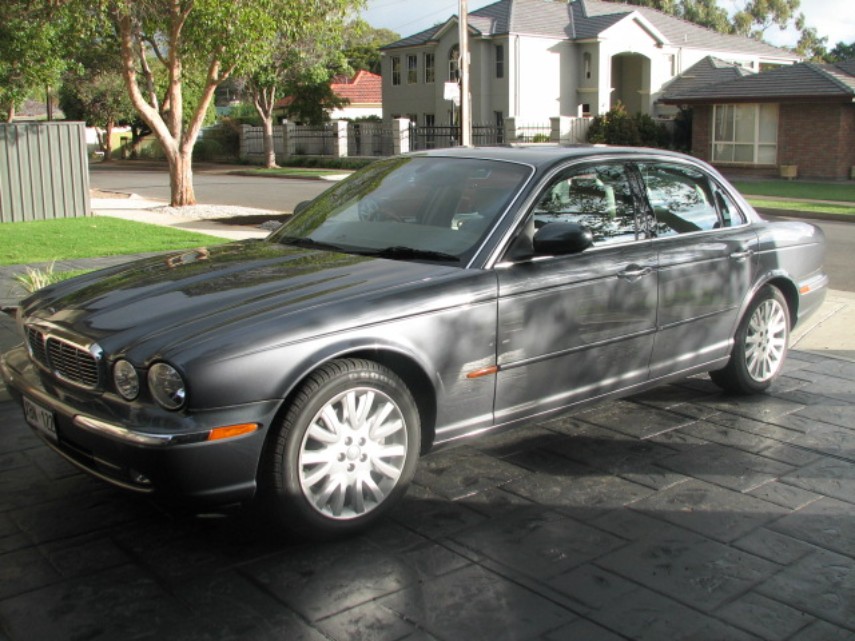 But There is More!

I have just returned from Melbourne (14th October 2010) with my XJC 1976 convertible. This means there is no more garage space so unless I move house this has to be it! Besides a divorce would be very costly.

I had been keen on the XJ two door coupe for some time and always considered it to be a model that would compliment my two current Jaguars.  Once I decided I wanted an XJC the search began in earnest. I found there were approximately 10 for sale in Australia in different configurations. I have to admit this surprised me given the relatively small number in Australia. There were V12s, 4.2ltr straight sixes, ( a 4.2 ltr was always my preference) there were ones with and ones without the original vinyl roofs, some with leather and some with rather awful velour trim and in a range of conditions from rust buckets to some very nice cars. Prices on the cars  ranged in price from $5,500 (E-Bay) to $38,000. I came within a Jaguar's wisker of purchasing the one priced at $38,000 having negotiated a final purchase price of $32,500. However family issues intervened and I cooled off on that deal. It was a very nice car but probably really worth around $25,000 in my opinion. When this convertible surfaced on the net there was little doubt this was the car for me and am delighted with my purchase. You can read more about the XJC and view more pictures HERE. 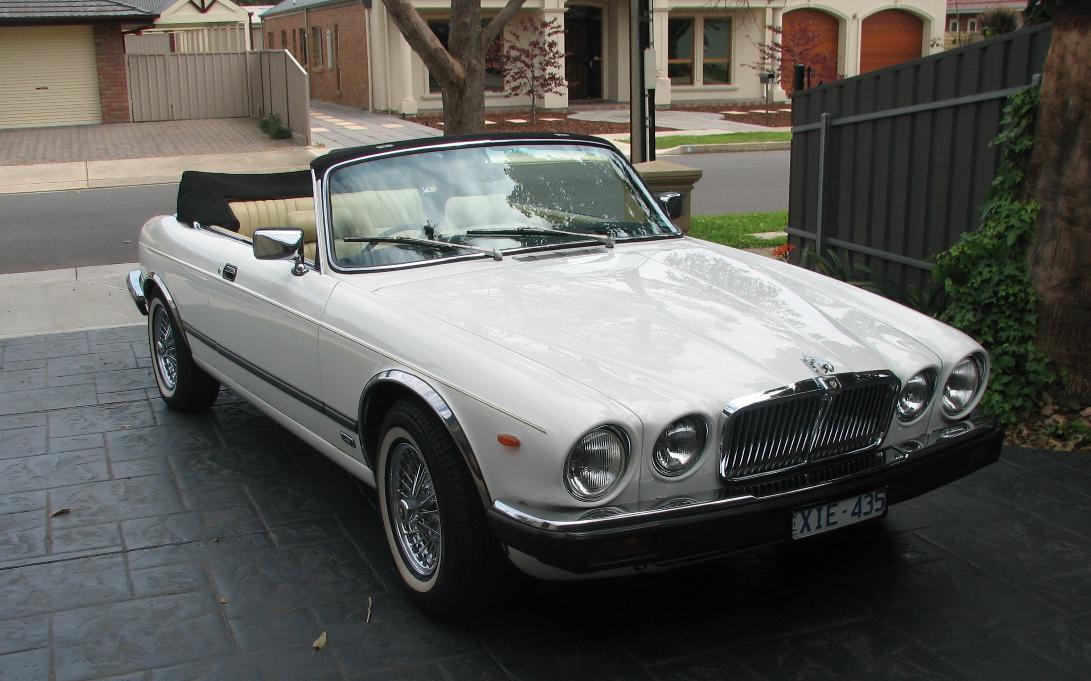 Time for an up-date.

I have decided to sell the X350. Shock, horror!  My wife is not happy, she now admits she likes the car. The rationale is to reduce the dollars tied up in motor cars and to purchase a replacement car for everyday driving that is more of a classic and somthing I can enjoy working on myself. I love the X350 but there is little opportunity to do my own work and maintenance etc.  So what to buy? That is the question. After much time and research I have purchased a 1969 XJ Series 1 MOD.  This is a lovely car and quite rare in Australia. At the time of purchase there were only two available to purchase in Australia and the other was a 2.8 ltr. not what I wanted.  More photos and details HERE. 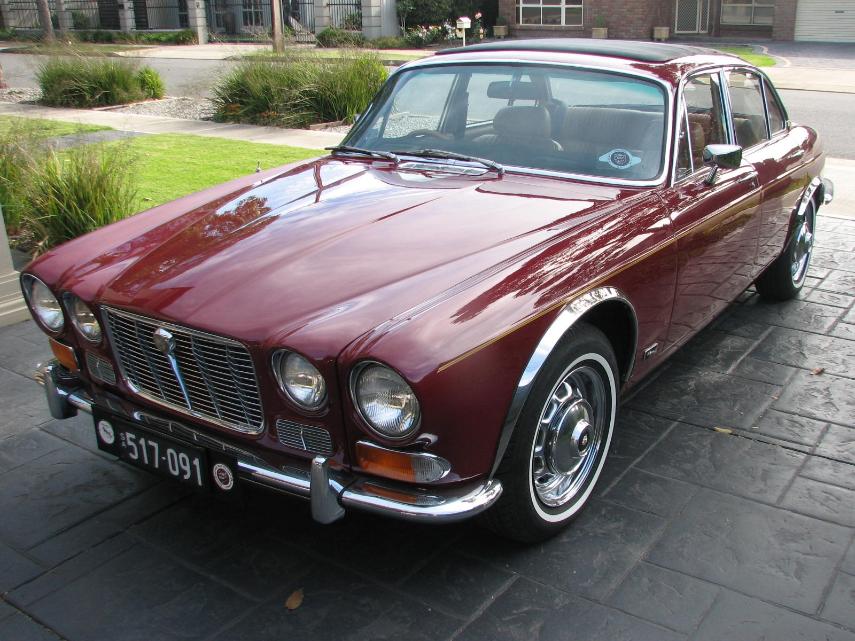 It is now September 2014.
Having sold the "White Lady" as my wife called her (XJC) I was determined to one day purchase another XJC. This time it would be an original car that could be maintained in its original form as far as possible.
My search was on for approximately nine months and eventually this 1977 Daimler became available unexpectedly on E Bay. Needless to say I bought the car and am very pleased with my purchase. More about the car HERE. 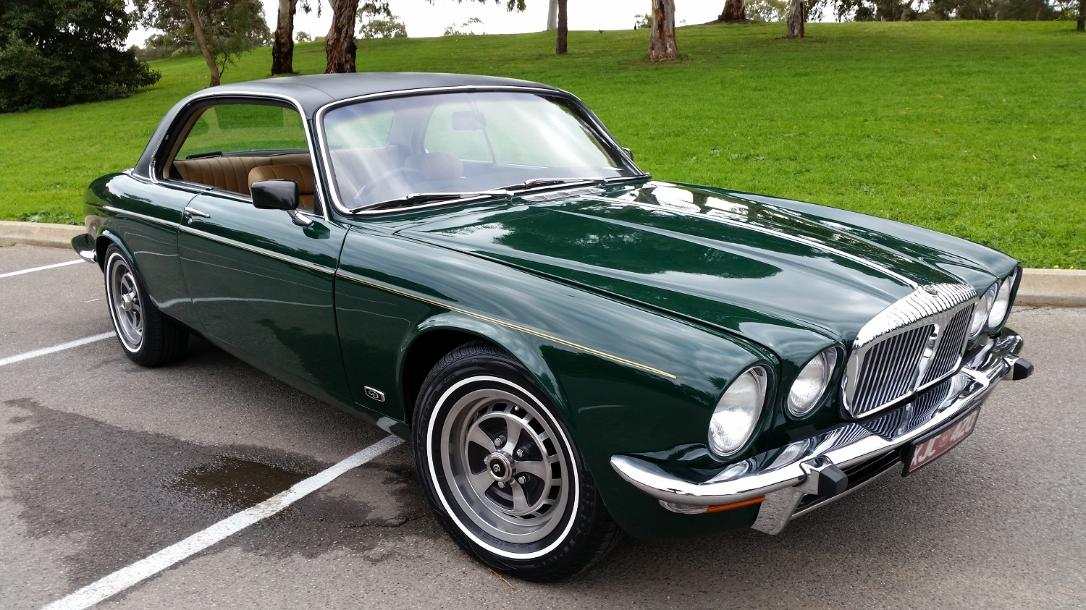 Life is too short not to own a Jaguar (or three)